Do you ever find yourself saying…

You are an unorganized, tired mess.

There aren’t enough hours in the day

I never get anything done on time.

The first two were wrong.

The third one there’s still hope. Someday I could go to the Senior Olympics. The pool of applicants is smaller 🙂

When you consistently tell yourself that you can’t do something or that you aren’t ‘that type of person’, you start to believe it. Telling yourself there isn’t enough time makes you feel rushed.

If you decide you don’t have 2 minutes to meditate you won’t. Looking back over the course of the day, was 2 minutes really so critical that you couldn't stop and gather your thoughts?

Would it have mattered 30 days from now if you didn’t spend two more minutes on email? Probably not, but a habit of meditating for two minutes over the course of 30 days and getting present in your work would not only boost your health but also your productivity – double dose! 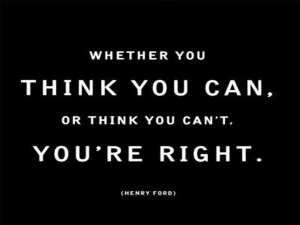 It's time to shift your paradigm.

If you have never been fit and tell me during a Strategy Session, “I’ve never been fit so I’m not even going to have that as a goal. I just want to be healthy.” Well, okay Mr. Buzzkill. You just made a decision not to be fit. Why can’t you be fit AND healthy?

Maybe your idea of fitness isn’t realistic because you’re stuck in high school where you were one of the last ones picked or you sucked at basketball. I was pretty good for my school in sports and thought I was an athlete. Because I went to such a small school (graduated with 25), it wasn’t hard to be good.

When I got to college I realized that…well, I wasn’t even average! Instead of continuing those sports, which I didn’t really enjoy anyway, I chose completely different activities. I started teaching aerobics, strength training, dancing and running. Because I was starting completely new at something, I didn’t have anything to compare it to.

I started hoopdancing about five years ago with my friend Lish. I’d never done anything like it and there are so many levels it’s just plain fun, no pressure attached.

Procrastinating? Same thing. If you say you are unorganized you tell yourself you fail every day OR you are giving yourself an out. An excuse.

Procrastination can be based on fear.

Do you feel inadequate and think there might be a complaint from a client in there?

Will there be another bill you haven’t paid?

I have a client who feared email and wouldn’t check it for weeks. I’m not kidding. She’s excellent at what she does but her clients would be appalled to know that she is that far behind. Why was she afraid? Invoicing her clients, getting invoices herself and possibly being rejected in an online dating world was enough to make her scared of her inbox. We fixed most of that, but it took some time.

Procrastination can also be selfish.

If someone is expecting something from you, why do you think that whatever you are doing at that moment is more important than what they need? It some cases it could be but I know for a fact that clients will do other tasks that won’t mean anything a week from now rather than do what someone is waiting for whether it’s an unconscious feeling of control and power or they are self-absorbed and just really only care about what’s important to them.

It may seem hokey or woo-woo to some of you to do positive self-talk daily. I used to think it was myself but now I put it out there in the universe all the time. Do I always believe it deep down? Maybe not. I believe in The Law of Attraction but I also know it has limits. Just because I say I am going to get all my tasks done today, it doesn’t mean I will if that list isn’t realistic.

Just because I say I’m going to win my next trail race doesn’t mean I’m somehow going to cut two minutes per mile off my time.

But one thing I know is that if I tell myself I’m a procrastinator, unfit, unorganized and never have enough time, I won’t.

When I had to stop exercising for a month I didn’t go around with a pity party saying I was going to become a flabby blob. As hard as it was, I tried to focus on the positive aspects, which was healing my gut and adrenals. I wasn’t super at this, but I was better than in the past when I would give my husband a death stare when he would complain about not being able to go on a ride that day when I had my arm in a sling or my wrist in a cast. 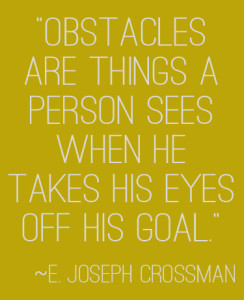 When I’m met with no Internet access when I planned to work all day, of course I’m frustrated and I might even gripe about it. However, I get started doing something else in the meantime and find things on my list that didn’t include Internet. Like now….I’m on the train to DC when I write this and thought I would be able to access my hotspot. Six hours I thought I could work but can’t.

I had a back-up plan though.

I saved blog writing until today (no internet needed) and will read my school assignment on my Kindle and listen to my podcast assignments.

What do you regularly tell yourself that ends up as self-sabotage?

If you know someone who is an expert at derailing himself or herself, please share this with them and tell them how organized, fit, healthy, and funny they are.