Triathlon, CrossFit, Marathon
Paleo, Vegan, FODMAP
It’s not important what you do.

It's less important that you label it.
It only matters that you do it.

How many times have you checked in to a class, fantasized about competing in a race or wished you had the balls to try something new?

I’m not someone who really cares about what sport is trendy, and typically, it tends to turn me off when they get too popular. When marathons started becoming commonplace, I switched to triathlon. Then when it became too hard to get into tris, I switched to dirt sports and focused on mountain biking, trail running and adventure racing. There’s definitely benefits to something being popular, it just isn’t my cup of Teeccino.

I have seven hoops in my garage and go to hoop camp every year. When I tell people I’m a hoopdancer they often smile, sometimes laugh or say “You mean hula-hoop?”

Whatever you have been dying to try or do, just do it. Don’t worry about how many people are making it trendy. Don’t think that because you love Jazzercise and the only people that are still doing it are over 50 and you’re 32 that you should opt out. I know someone who continually has problems with CrossFit but keeps going even though that isn't really what lights her up.

What is going to set you apart is that you are making it happen. 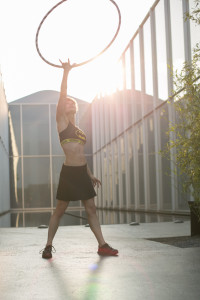 It’s not important what nutrition plan is the latest and greatest – Paleo, Vegetarian, low-carb, high-fat, low FODMAP, gluten-free. What matters is that you find one that makes you feel good, makes sense for your health and is easy for you to sustain. I used to be a vegetarian. After the initial embarrassment of eating meat again, I actually felt relieved after a while to be rid of the label. I had felt like if I wanted to eat my girlfriend’s organic turkey on Thanksgiving that she spent hours perfecting, I was somehow cheating on myself. For a freakin’ piece of turkey! No label? More flexibility!

It’s not important that you even have a plan, as long as the plan involves JERF.

If you see yourself as someone who doesn’t exercise, it’s time to reframe. Instead, see yourself as someone who hoops, hikes, performs martial arts, or dances. Whatever it is, just don’t use the word exercise. For some people, like myself, I’m going to identify with just about anything that involves movement and don’t mind the term. For you, it may mean starting with identifying in a way that doesn’t make it seem like exercise if you’ve failed at being consistent before.

Performance goals are sometimes more easy to measure than outcome goals. I have a goal to practice hoop skills 5 minutes three times a week. It’s very easy for me to track if I've done it.strong>

Outcome goals are placing in a race, being able to stay on an elimination diet for two weeks to figure out what’s keeping me up at night, and advancing to the area finals in my latest Toastmasters competition. 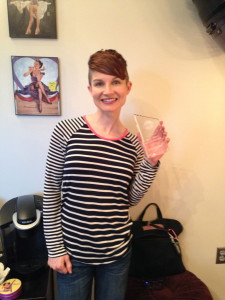 Who do you want to identify with?

The person who lives by an 90/10 rule of healthy foods with 10% thrown in to not fit in a box or someone who feeds their pets better quality of food than they eat themselves?

Relying on external motivation or someone to always push you may mean that you end up not doing it. Find whatever your WHY is to be inspired.

Stop looking for the motivation and become the inspiration.

Not every day is going to feel awesome.

Not every meal is going to be your favorite.

Anybody can schedule. Not everyone keeps it.

The difference is that the people who are inspired find a way to correct and continue and be the best they can that day.

As a busy person with a lengthy task list and not enough time in the day, do you wonder what it would take to finally check that last box?