Has anyone ever given you a hard time about trying to eat healthy or exercise on the road? Has anyone ever tried to pressure you into straying from your plan (which will make them feel better about themselves)? 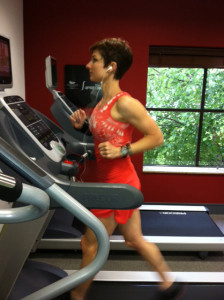 I have been called many things when it comes to health, fitness, training….obsessed, boring, nut, addict, but I would prefer to be thought of as committed or dedicated. I have spent the last 20 years being committed to one form of physical activity or another. It started with aerobics and yoga in college and then changed to running. Once I qualified for Boston I became heavily involved in triathlons. After the ultimate goal of Ironman I moved more into off-road everything – mountain biking, trail running, hiking, adventure racing. A couple of years ago I started hooping and attended my second hoop camp in June.

It drives me insane to be judged about my dedication to working out. I don’t go hard every single day and being involved in so many activities makes it easy to do active recovery. I have regularly trained in mountain biking, running, hiking, Ashtanga yoga, Pilates, TRX, SMRTCore, hoopdancing and swimming. I also get massages regularly and am pretty diligent about recovery foods.

Some people need coffee when they get up in the morning. I definitely need to get my sweat on. I am a morning person for sure and naturally wake up before 7:00 but I don’t really like to talk to anyone before that time. I like my alone time and to be able to just get up and start training within 15 minutes of eyes open. There have been times where I shortened a work dinner or opted not to go out for drinks because I wanted to make sure I got enough rest and was able to get up early the next morning. If it is an important event with a client that is one thing but when a traveler is on the road all the time, that catches up to you and you have to prioritize.

It’s funny how people will refer to something healthy in a negative way but it is usually only those people who are insecure about themselves. People who spend too much money will remark about how cheap people are. People who eat fast food will call those who don’t ‘food snobs’. When I hear people make these kinds of statements I don’t usually argue because my opinion is that it is out of insecurity. I don’t think when I am on my death bed, that I will wish I had spent all of my money so that I was working at Walmart at 80, had eaten a diet of fast food instead of eating real food that is delicious or sitting on my couch so that I could watch mindless television and die an early death. No, I definitely think I will be glad I lived ‘committed’.