A few weeks ago I had so many accidents in one week it was comical. Sunday morning, before meeting friends for brunch, I went on a one-hour bike ride with my husband on the greenways near our house. It was three hours after a rain and the bridge, which is slick even when it isn’t raining, decided it didn’t want me upright and WHAM, I was down, falling right on my face and left side (and for the umpteenth time, yes I was wearing a helmet because I am a smart woman). The amount of blood was impressive, so much so that my husband got sick and had to take a few moments before he could even look at me. Several people stopped to help me, and while sitting there, another woman wrecked in the same spot and a man said he had crashed going the opposite direction. We walked my bike out and went to the ER.

Lesson – Almost everyone on this busy Sunday stopped to make sure we were okay, and one gentleman walked us to a nearby parking lot for a friend to pick us up. Unlike when I lived in Washington DC and was assaulted during a rush hour train ride with no one to help me, I’m thankful I live in a city where people still stop to make sure you are okay.

In the ER, the P.A. thought I might have a broken elbow, so she casted it from shoulder to knuckle and put me in a sling. A head CT showed no concussion, but I did need 12 stitches around my eye. The only time I cried was when I was told about the procedures, and those tears were for my wallet because we are a self-employed, self-insured family with a $13,000 deductible before ANYTHING is covered.

She also asked me if I was on antibiotics for my raging sinus infection she discovered on the scan. What sinus infection? Ahh…must be all that jaw pain for two previous weeks that I thought was stress-related and was ready to schedule a facial or reflexology treatment to fix! Expensive way to get a sinus diagnosis.

Lesson – Unless you are in severe pain or bleeding non-stop, go home first and change clothes, get a sweater and reading material. I also managed to pack a lunch for my husband in a cooler while holding my face together. We were in the ER for five hours. If you wreck on trails or greenways near your house, call the city or park and let them know. The City of Raleigh was very thankful because they don’t have the manpower to check the miles of trails regularly and this prompted them to go out and look at it to powerwash or put something grippy on it. Lastly, I had put back $5000 earlier this year specifically for deductibles. That was a smart money move. 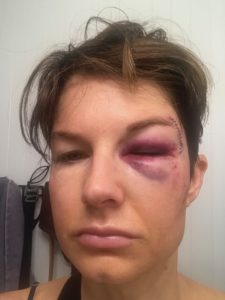 I managed to postpone or cancel all my face to face meetings throughout the week (thankfully no traveling speaking gigs) and conducted everything via Zoom, with the first day being no video so I wouldn’t distract my clients since my eye was swollen shut. I was never in pain, but it was inconvenient. Typing one-handed is no fun and voice to text isn’t perfect. I couldn’t open any jars or bottles, or chop food, so it made it hard for me to eat since I don’t have a lot of prepared or convenience foods. My friend and hairdresser, Michelle Scaraglino, asked what she could do and I said: “come over and wash my hair in the sink.” She hadn’t thought of that, and I was dying for my hair to feel clean. She also brought over enough food for three meals and hung out with me for about an hour.

Within hours of finding out, two other friends and clients, Wendy Gates Corbett and Helen Moses, messaged my husband to ask if it would be appropriate to hire my House Assistant to work a couple of extra hours that week. Brilliant idea and it gave her time to make me a delicious chicken soup that we got three meals out of.

On Friday, five days post-crash, I had another X-ray which showed that there was no break, just bruising and I could take the sling off in a couple of days. Well, that night the sling and cast put me off balance, and I stubbed my toe so hard I broke it. That’s #2.

Another friend and client, Kendyle Woodard, brought over about 10 prepared meals from Clean Eatz that could be defrosted and popped in the microwave if necessary because she knew I would be most concerned with eating healthy and that my husband’s idea of preparing a meal pretty much ends at nachos.

On Saturday, my best gal Lisa Wood drove me to lunch and to pick up an ointment from a plastic surgeon to help with the scarring. It was the first time I had left the house in a week except for the X-rays.

My friend Becky Sansbury, who wrote one of my most gifted books, After The Shock, would be so proud! My friends didn’t ask me what I needed, which puts the pressure on the person needing help. Instead, they thought what would help me the most and meals and errands were the big things. I also said explicitly what I needed (wash my hair) when I knew what would really make me feel better.

Lesson: Don’t ask a person to let you know if you can do anything, just do something. Also, be specific if you do indeed need something. I told my husband to open up all the jars in the refrigerator just a little bit

The last accident occurred eight days after the first one. I use a screen that attaches to the ceiling for video, and it fell down and hit me square on the nose. For about an hour I thought it might be broken, but thankfully it wasn’t. That’s three in one week. I have never heard “bad things come in threes so you must be done” so many times. It’s funny because I’m not suspicious like that, and no one ever thinks when only one bad thing occurs, that they should be thankful that they didn’t have two more.

I’m healing really well. Super fast and the docs are impressed. How did I do this?

Except for about 1/2 cup of ice cream on Sunday (because damn it, after not eating all day in the hospital and wrecking my face, that is what I wanted), I stuck to my healthy eating and didn’t have sweets during the week to help reduce the inflammation.
I iced at least three times a day.
I took turmeric capsules twice a day for inflammation.
I only took Tylenol one day and ibuprofen for three days because both aren’t good for your gut health. Since I was also on antibiotics, I knew my gut would be a wreck after this was all over and started probiotics as soon as I was done.
I still exercised…yep, even with a cast and sling. My legs weren’t hurt, and I couldn’t do my usual routine, but it’s not a reason to skip moving.
Continued to take my heart rate variability and took it easy when I needed to.
Drank a teaspoon of elderberry juice every day.
Had two chewable ginger capsules a day for stomach upset from the antibiotics.

Now that my stitches are out, I'm doing scar massage 1-2 times a day for 3-5 minutes and put Bicorneum over it to help encourage fading.

What is the point in all of this? That things happen. I was uncomfortable. It was inconvenient, but I had the help I needed without feeling like a burden. It was a reason to change some things, like switching to video calls or walking instead of running, but not an excuse to phone it in. It was a reason to be even more diligent about sleep and healthy eating, than use it as an excuse to feel sorry for myself. This helped me heal faster.

Buy Becky Sansbury’s book, After the Shock, and learn how you can best help someone going through any kind of pain or crisis, whether it’s major like death, loss of a job, or medical diagnosis, or minor inconvenience like an eye that’s swollen shut, a broken toe and jacked up elbow.