Why you might not change your behavior in 21 days.

Have you read that behavior change takes 21 days?

I've seen this as a magical number in many books and publications, but it comes down to the person, the behavior change, how aligned they are with their current habit, and the tools in their arsenal to modify it.

When I went through a massive one-year behavior change several years ago, I knew that tackling more than one area at a time would result in failure. I was unlearning habits I had since the time I was fed solid foods. The Magic 21 could occur for the small changes, but not for the ones that required steps.

People have a misconception that all vegetarians are healthy. I would say that among all of them I know, myself included, only about half would probably be considered to have a healthy diet. They (and formerly myself) load up on grains, starches, processed soy foods, and are often eating as many convenience foods as meat eaters. When I was trying to change my habits, I was a vegetarian.

When I wanted to increase my vegetable intake, I couldn’t go from eating 1-2 servings of vegetables a day to 5-7 overnight. Some days I was barely getting two. I wasn’t brought up on eating vegetables and if asked to name ten meals that we often ate as a family, none of them would have a vegetable unless you consider potatoes and tomato sauce as a vegetable (reaching). I had to start out with making sure I had one serving a day every day for a week. Then I bumped it up to two servings. Then three. By week four, I was struggling a little bit. I needed more time to develop this habit.

At first I felt like a failure because I didn’t reach the Magic 21 to transformation. I did more research and realized that my steps were too drastic for a 21-day change. I didn’t know how to prepare or cook a lot of vegetables and needed time to experiment and figure out how I was going to add these into my diet. Adding in sometimes meant taking things out. Being on the road meant getting creative. It also took time for my tastes to change to crave healthier foods. The whole vegetable behavior change took about three months. Now if I don't get a minimum of five I don't feel satisfied and I really do crave them. Trust me, your tastes will change. 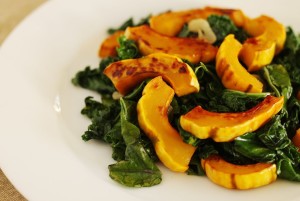 Something that helped me was to look at my meals the same way I looked at my exercise routine when I was on the road. The gym, weather, space in the room, etc. wasn't always ideal, but it wasn't going to stop me. It was the same with veggies. Maybe spaghetti squash didn't taste as good as spaghetti pasta in the beginning, and maybe I would rather have had a sandwich with two big slices of ciabatta bread instead of a cabbage leaf, but eventually, I got used to it and then preferred it.

I made the process challenging, but not out of my reach. I tried new recipes, joined a Community Supported Agriculture service called Papa Spuds, and vowed that this was going to be a change that would stick. I put it on that white board and told everyone I was eating with, whether it was a co-worker, my husband, my family or my friends, so that I would always make the right choice.

Some changes can be made in 21 days. Some require more time. The message here is that if you don't make it you're not a failure. Break down your steps into a few or even several '21s'.

What are you trying to change that might require more than 21 days?